Colorful, diverse and creative are the impressions Emanuele Fioroni's paintings give people.

Fioroni, who prefers to be called Lele, shows that style rules in his works. Lele used to be a web designer in Milan, Italy, and he is passionate about exploring new things and places. He realized his dream of becoming a painter in Shenzhen, a land of great promise to the art world's newcomers. 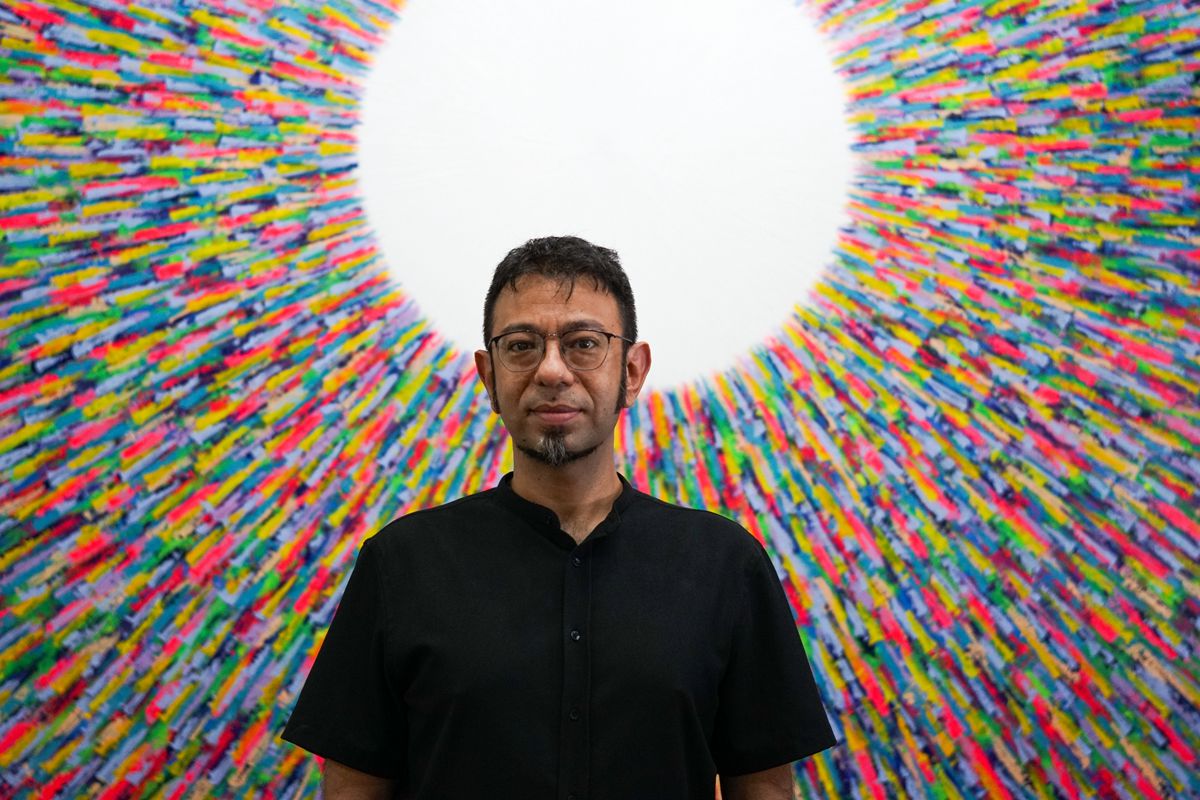 Fioroni, or Lele, poses for a photo with one of his paintings at his studio in Longgang District. Photos by Wang Haolan

Eleven years ago, Lele first visited Shenzhen on a business trip in South China. He was lost for words in describing his first impression of the city, particularly the magnificent skyscrapers.

"I was like, WOW! We went all through Nanshan, Futian to Luohu [districts], seeing all the buildings. That was a window of Aaah!!!" he exclaimed. 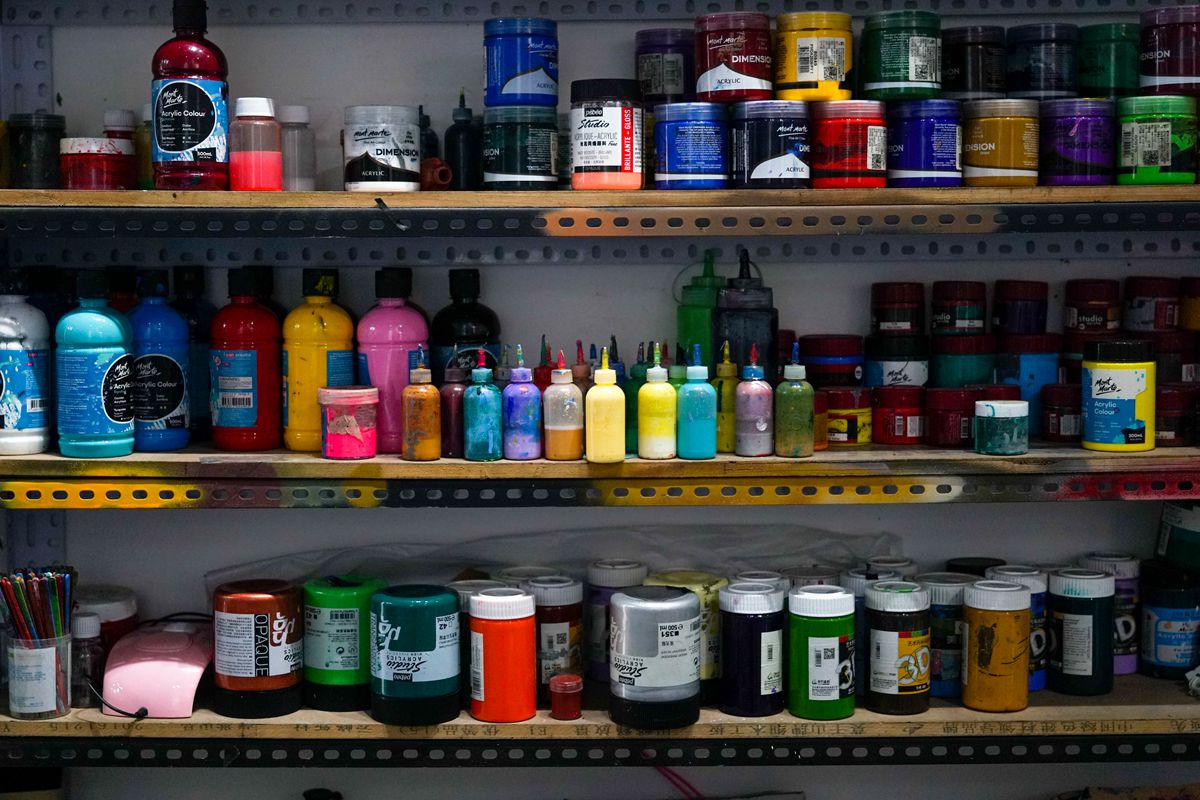 A scene at Lele's studio.

To Lele's surprise, the city had so much more to offer. In 2014, he decided to settle down in Shenzhen, working as a web designer and drawing in his spare time.

"I always have a passion for painting, but I didn’t start to pursue a career as a painter," he said. The turning point came in 2018, as his adventurous personality fired up a desire to make a change in life.

"Sometimes, there is a different thing growing up. Then the day arrived: I began to paint. I went to Dafen Village [in Longgang] to buy canvas and pigments," he added. 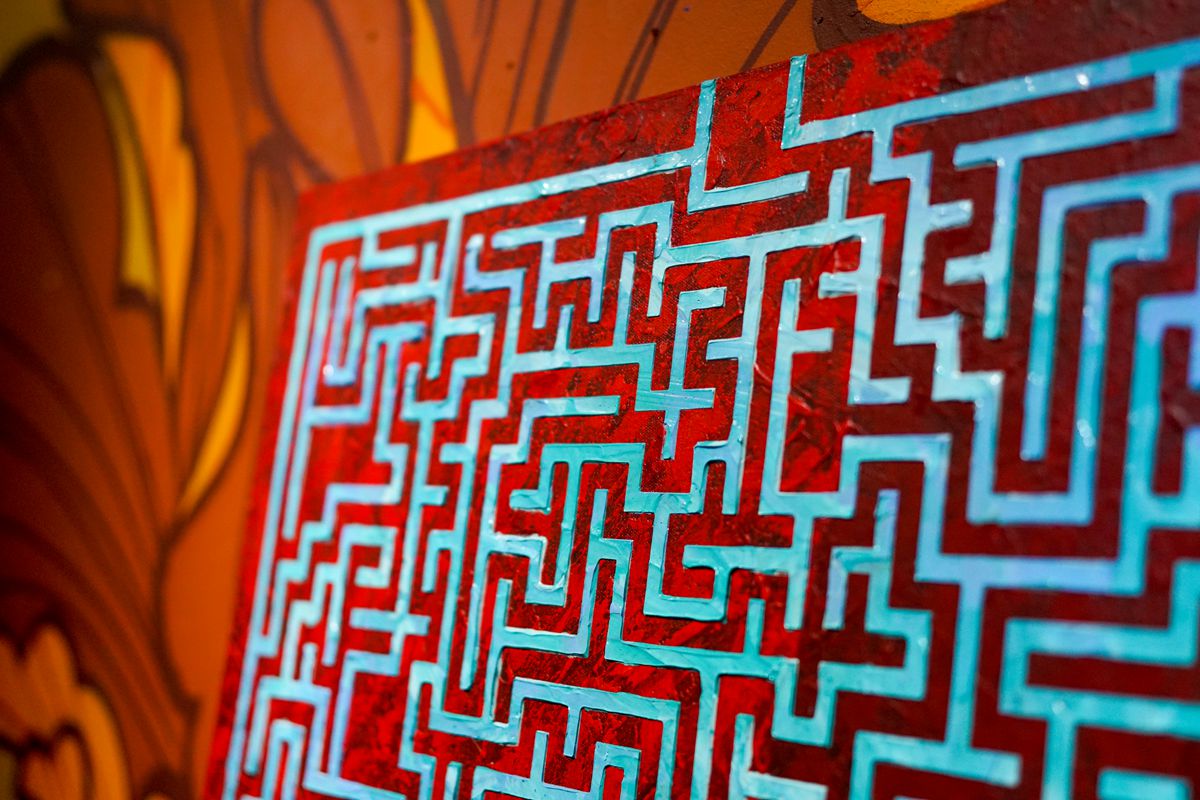 A maze-themed painting created by Lele.

Lele showed an outstanding talent for drawing and an innate aesthetic sense for lines and colors, which soon attracted attention from Shenzhen's artistic circles. After submitting his works to apply for a booth in T Street Creative Market at OCT Creative Culture Park in Nanshan, Lele has been lucky to display his paintings.

"They always chose me, and I sold my first painting and got in touch with galleries and buyers there," he said. At the end of 2018, Lele’s works reached an even wider audience when it was exhibited at The Box Studio in OCT.

Over the following years, Lele has hosted and participated in a number of exhibitions, including four solo exhibitions across the city, while cooperating with brands such as Starbucks, Hilton Hotels and Resorts, XPENG Motors, and Shenzhen-based Queen'd Garment, among others. 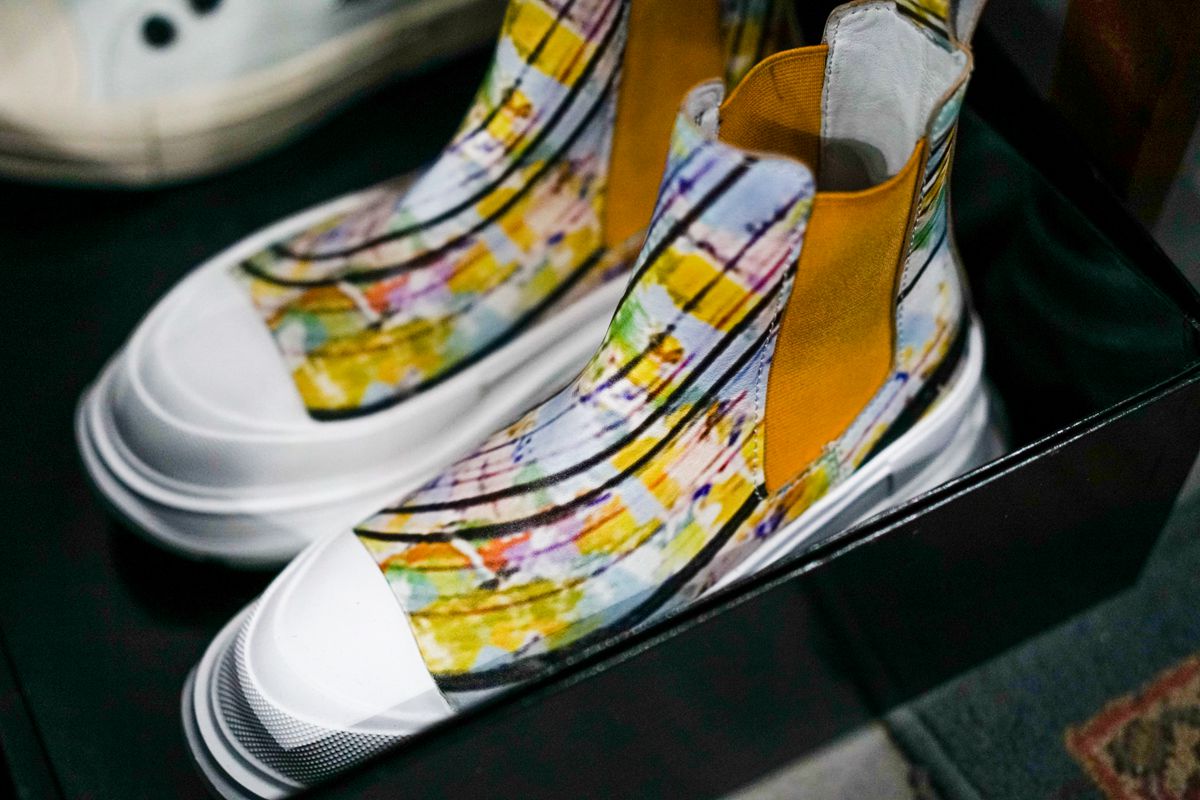 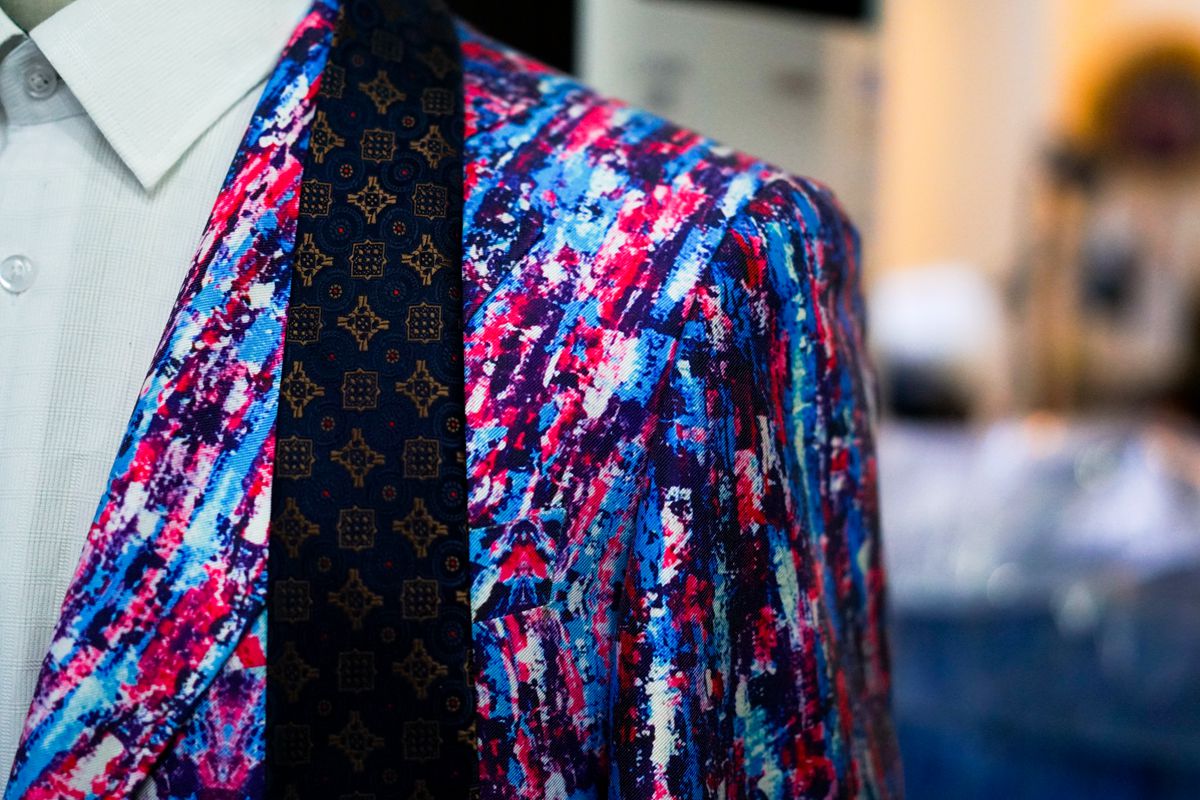 Motifs from Lele's paintings are used in some co-branded products such as canvas shoes and jacket.

Lele's most successful works are a series inspired by Chinese characters. "When I got lost in the sea of Chinese characters shining and flashing different colors at night, I was like WOW! Every single word is an artwork by itself," he explained.

Lele, who can't write Chinese characters at first, deconstructed Chinese words, ranging from a single character to four-word idioms. He drew his creative interpretations in various images, colors, tones and textures, turning his work into a word puzzle. 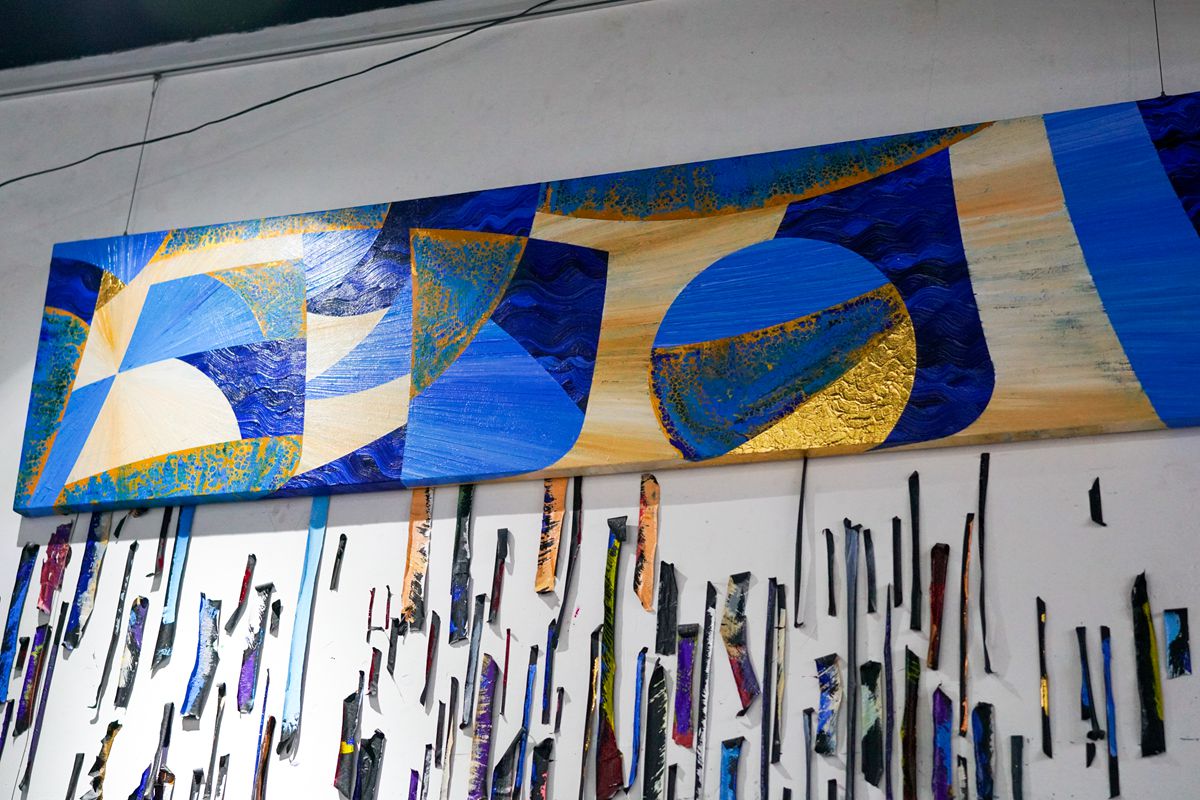 Lele is now taking inspiration from seal script, an ancient style of Chinese writing. "My goal is to make a collection book of at least 100 works," he said.

One of his other plans is to create an abstract painting of Futian CBD viewed from Lianhua Hill.

"I watched Shenzhen's 40th anniversary light show in Lianhua Hill, which really took my breath away. WOW! I had never seen such a scene in a city before," he recalled.

"I want to make a crazily colorful sky with buildings that contrast with each other. That would require a few months to be painted and I hope I will have an assistant soon," he added.