Shenzhen MSU-BIT University (SMBU) held a commencement ceremony for its 2022 graduates, which include 123 undergraduate students and 34 graduate students, on its Longgang campus June 24.

Students from the Faculty of Materials Science of SMBU receive bachelor's degree certificates during a commencement ceremony held at the university's Longgang campus June 24. Photos by Sun Yuchen

As of now, around 78% of the undergraduates will go on to further their studies in SMBU or other top universities around the world. Seven students received offers from renowned companies like Bank of China. Over 50% of the graduates with master’s degrees will pursue doctoral degrees, according to SMBU.

Approved by the Ministry of Education in October 2016, SMBU started to enroll students for undergraduate and graduate studies in 2017 and for Ph.D. studies in 2018.

In 2021, SMBU celebrated the graduation of its first batch of 100 undergraduate students. This student cohort had an enrollment rate exceeding 86%, with 84 students enrolled in a master’s degree program in universities at home and abroad. Seventeen of them had received Chinese government scholarships to study abroad and another nine got offers from renowned companies like Huawei and KPMG.

Over the years, SMBU has cultivated a group of high-quality talents who are proficient in both Chinese and Russian cultures, can speak three languages — Chinese, Russian and English, and show high professionalism as well as an innovative spirit.

SMBU graduates pose for a photo in front of the school's main building after a commencement ceremony in this file photo.

SMBU has been firmly sticking to the goal of "building a high-level university and cultivating high-quality talents." SMBU implements small-class teaching, with a seminar-based delivery method. The school also devises teaching plans and materials tailored for learning Russian language based on cultivation plans.

In 2021, SMBU was included in the construction of a new round of high-level universities in Guangdong Province. Four subjects including math, materials science, biology and applied economics were among the provincial key construction projects. Four undergraduate majors, specifically Russian language, math, materials science and international economy and trade were chosen as first-class undergraduate majors in Guangdong Province.

Since 2020, more than 80 students won over 60 prizes in national, provincial and municipal-level contests. SMBU reaped fruitful results with one Meritorious Winner and two Honorable Mention awards at the MCM/ICM contest, the only international and most influential mathematical modeling contest around the world. Five undergraduate students published five theses in Q1 journals.

This year, SMBU will enroll a total of 678 undergraduate students from 21 provinces, autonomous regions and municipalities by comprehensive enrollment method where the students' final score is comprised of 60% from the national college entrance exam (gaokao) result, 30% from SMBU's autonomous ability test and 10% from the school's academic proficiency test. 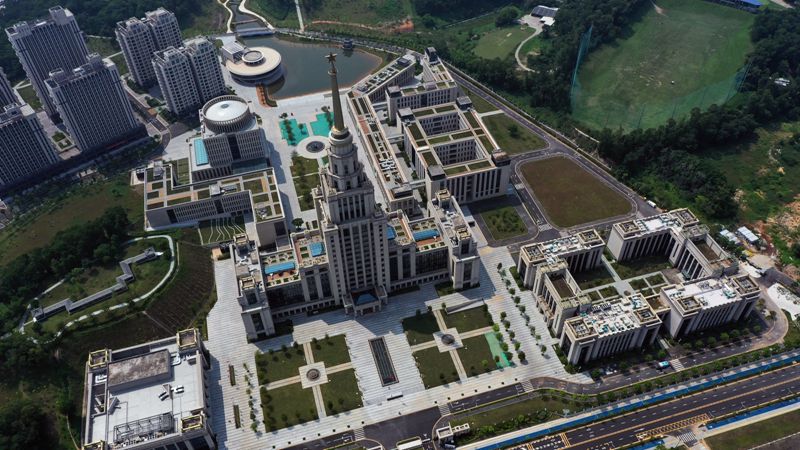 SMBU built a campus that blends Chinese and Russian architectural styles. The 2-billion-yuan (US$311 million) campus covers 333,700 square meters. The architecture is in classic Russian style, surrounded by Chinese gardens. The campus, a new landmark in the city, won a China Building and Decoration Award, the highest award in China's architectural decoration industry, in 2020.

SMBU has put great efforts in laboratory establishing. As of now, the school has 74 teaching laboratories with nearly 1,500 pieces of equipment.

In 2019, with the approval of the city’s science, technology and innovation commission, about 20 million yuan was invested in the construction of eight scientific research platforms including an applied nanophotonics platform, a distributed intelligent energy industry application laboratory, and an aviation internal combustion engine performance laboratory.

At present, SMBU has established a joint research center for computational mathematics and cybernetics, an advanced interdisciplinary technology research center and the Sino-Russian Comparative Law Research Center, and is promoting the construction of basic research, technological innovation, and humanities and social sciences platforms.

At present, nearly 75% of the school’s teachers are from MSU. The rest of the teachers were either dispatched by BIT or recruited from around the world.

The school has formed a group of high-quality internationally competitive teachers. Over 85% of the school's teachers hold a doctoral degree. The teaching faculty includes nine academicians from the Russian Academy of Sciences, one world’s top 2% scientist and 18 scholars under Shenzhen’s talent recognition scheme.

Shouldering the responsibility of "deepening Sino-Russian education cooperation and enhancing the friendship of the two peoples," SMBU has become an important platform for people-to-people exchanges between China and Russia. Over 20 delegations from Russia’s political, educational, sports and business circles have visited SMBU since the university's founding.

It has also established cooperative relations with universities and organizations including the Financial University under the Government of the Russian Federation, Far Eastern Federal University, University of Bayreuth, and Interfax, and has set up Russian and Chinese test centers.

On July 1, 2021, SMBU launched The Pinnacle, a trilingual campus newspaper, which aims to be a platform to promote cultural and educational exchanges between China and Russia.

In September 2021, SMBU held 27 events themed "Impression Russia" during the 17th China (Shenzhen) International Cultural Industries Fair, becoming the only university among the 67 subvenues across the city for the cultural fair. The 27 events, divided in 12 sections, provided visitors an immersive Russian culture experience.